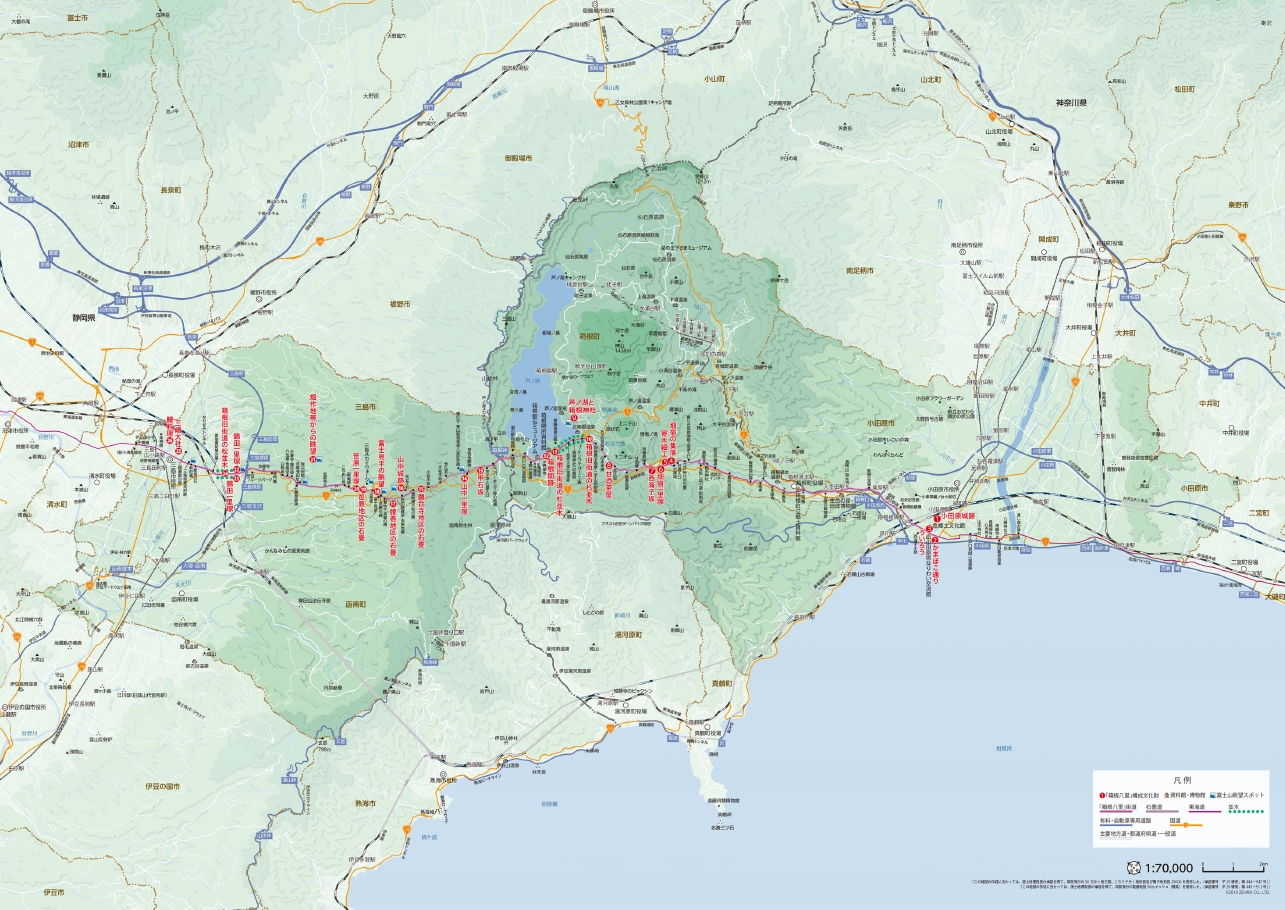 Odawara was a castle town developed by the Hojo clan. It was one of the largest post towns along the Tokaido in the Edo period. The Okubo clan and Inaba clan governed the area to protect Edo to the east, and the administrative headquarters of Odawara Domain was installed there. Stone walls, white plaster walls, a restored castle tower, and castle gates convey the atmosphere from the Edo period as symbolic features of Odawara Post Town. Akagane Gate is the front gate of the outer bailey. It was restored in 1997. The name of the gate “Akagane” literally means “red metal” which came from the use of copper to decorate the large gate doors. Umadashi Gate is located along a large road. It was an important gate to protect the outer bailey of Odawara Castle and restored in 2009.

Once someone connected with fishing – perhaps even by the local head fisherman – produced kamaboko, or cooked fish paste, from fresh fish caught in Sagami Bay. Sales channels with hot spring inns in the Hakone area were later established, and over time kamaboko developed into one of the Odawara local specialties. Long-established stores in historic wooden buildings remain along Kamaboko street.

Uiro is an apothecary at the entrance to Hakone which has been in business since the Sengoku period (late 15th to late 16th century). The Uiro family moved to Odawara upon the invitation by Hojo Soun. Members of the Uiro family served as the chief vassal in the Edo period. While they sold medicines based on their family traditions, they also produced and sold uiro, or sweet rice jelly. The Uiro family was widely known among the travelers of the Tokaido. In a storehouse at the back of the building – which has white plaster walls and a tiled yatsumune (complicated)-style roof – a museum has been created, which displays references passed down over generations.

Hatajuku Community is one of the villages that was located between post towns back in the Edo period. The community provided teahouses for Hakone travelers to rest. Feudal lords and delegates of the Dutch Trading Post who rested at Myogaya Teahouse in Hatajuku described the area in their travel records to visit Edo.

The skill of yoseki-zaiku was reportedly established by Ishikawa Jinbei of Hatajuku in the late Edo period. Wood crafts of yosegi with the mosaic work created by applying different types of wood in small pieces were widely known among the Hakone travelers as a fine souvenir.

The 23rd milestone from Nihonbashi in Edo. It was built by stacking stones in a cone shape with a diameter of about nine meters at the base, placing pebbles above them, and covering it with soil. Fir and Japanese zelkova trees were planted on the mound as a sign of the milestone. Milestones were found at three locations, Yumoto Teahouse, Hatajuku, and Hakone in Hakone Town.

Coming from Edo in the east, it is an short uphill slope of about 120 meters, but the slope is so steep that people used to say that if you slipped off it, you would fall into a bottomless valley.

This teahouse beside the route has been there since the Edo period. There used to be multiple roadside teahouses nearby for travelers passing through the steep ridge.

The teahouse has an irori, a traditional Japanese sunken hearth, and a thatched roof, and offers two specialties; amazake, a sweet low-alcohol sake drink, and chikara mochi – a type of rice cake.

Against the backdrop of Mt. Fuji, Lake Ashinoko is filled with clear water and surrounded by the Hakone mountains. This is the scenic beauty that travelers of the Edo period longed to see. Hakone Shrine, located on the shores of Lake Ashinoko, was established in the Nara period (710 AD to 794 AD) by the monk Mangan. Samurai lords such as Minamoto Yoritomo and Tokugawa Ieyasu offered prayers at Hakone Shrine after the Kamakura period (1185 to 1333).

This section of road beside Lake Ashinoko is the only one that remains along the Tokaido that is still bordered by Japanese cedar trees – about 400 tall trees line the route. The rows of trees were planted in 1604 to define the road width, and to protect travelers from the sun and heat in summer, and wind and snow in winter. Pine trees were initially planted but later replanted with Japanese cedar.

The Hakone Checkpoint was installed at this location in the Edo period to monitor those passing through the area. The Tokugawa shogunate placed great importance on the steep Hakone mountains as a way to protect Edo. The Odawara clan administered the Hakone Checkpoint. Officials there specifically watched out for de-onna (literally “exiting women”) who were fleeing Edo after being taken there as hostages by the Tokugawa shogunate. The checkpoint has been restored based on documents from the Egawa Bunko (Egawa family historical collection). Egawa Hidetatsu, a Tokugawa shogunate intendant (public official), was in charge of domains in this area.

Kabuto-ishi Slope literally means ‘the slope with samurai helmet-shaped stone’, and was named after the unusually shaped stone that used to be located on the slope. This is a tasteful slope where Hakone bamboo overshadows the stone pavement.

This milestone remains on the south side of the former route. Records from the Edo period indicates that there was no tree on top of the mound.

The drawing of the West Slope from the Edo period depicts stone bridges at six locations. One of the two stone bridges in the Gango-ji Temple area, “the stone bridge with a lone cedar tree” still remains in its original condition.

The Hojo clan constructed this castle on the slopes of the mountain in the 1560s to protect Odawara. In 1590, the castle fell during the attack on Odawara by Toyotomi Hideyoshi. Moats with obstacles at the bottom and ridge-shaped moats constructed with the most sophisticated technology of Hojo-style castle construction techniques still remain. This is also a scenic spot with a great view of Mt. Fuji and Suruga Bay.

Ruins of the moats of the Yamanaka Castle were unearthed from beneath the stone pavement of the Koshimaki area. The route was presumed to be constructed by burying a section of the moat of Daisaki Demaru, a small walled area protruding from the main walls of Yamanaka Castle.

A famous view spot of Mt. Fuji widely known among travelers of the Tokaido in the Edo period. The splendid view was often recorded in travel journals and pictures back then. The monument to a haiku poem by Matsuo Basho about his travels in Hakone can be found nearby.

Sasahara Shinden was one of the five Shinden communities established along with the construction of the Tokaido. The vista opens when travelers descend the slope to this area, and a sweeping view of Mt. Fuji and Suruga Bay appears.

This milestone remains on the south hill slightly above the stone pavement of the former route. Trees such as chestnut trees are growing on the mound today, but a record from the Edo period says pine trees were planted there.

21. A view from an upland farming area

Residents of the Shinden community along the former route cultivated the west slope of Mt. Hakone when the flow of travelers decreased in the Meiji period (1868~1912). They expanded their farms and made a life out of farming. Hanging Daikon radish to dry with Mt. Fuji in the background is one of the famous winter iconic images of this area.

24. Rows of pine trees along the former Hakone route

When descending the West Slope in the direction of Mishima Post Town, rows of pine trees remain along the former route leading to Mishima Taisha Shrine. The pine trees continue for about one kilometer, which is the longest along the current Tokaido. A location name of Hatsunegahara – which is connected to Minamoto Yoritomo – remains nearby. This is also a scenic spot with a great view of Mt. Fuji.

Mishima Taisha Shrine is the top shrine in Izu Province, and samurai lords such as Minamoto Yoritomo offered prayers there. The main shrine, the offering hall, and the worship hall are registered as important national cultural properties. The ancient fragrant orange-colored olive tree in the grounds of the shrine is designated as a national natural monument. The treasure museum exhibits artifacts registered as important national cultural properties.

Residents of Mishima Post Town have long protected eels as the messengers of the god of Mishima Taisha Shrine. Eating eel only became popular after soldiers from the west – the Satsuma (from Kagoshima) and the Choshu (from Yamaguchi) who had travelled along the Tokaido in the late Edo period, ate eel and avoided divine punishment. Many eel restaurants still operate in the Mishima area.